A few weeks back, I had the  privilege of meeting the National Ambassador for Young People’s Literature, Jon Scieszka, at a book signing event hosted by Tree Top Kids in Arlington, VA. The street leading up to the store was filled with fans. Ambassador Scieszka was chauffeured to the event by Charles Young, in a shiny black car with tinted windows and two American flags suction-cupped to the sides. When they pulled to a stop, the crowd went crazy! A red carpet was rolled out, trumpets sounded and we all caught our first glimpse of the first ever National Ambassador for Young People’s Literature.

Okay, so that’s not how it really went down – it should have, though! In all seriousness, this guy is fantastic, and you’ll be able to tell by the following interview. He’s a great sport for talking with The Children’s Book Review after having just returned from a cross-country tour to promote Melvin Might, the latest edition to the Trucktown series. Enjoy …

Bianca: From where did you draw the inspiration for the Trucktown series?

Jon: From growing up with 5 brothers, loving cars and trucks, and smashing and crashing our cars and trucks. I also based all of the characters on kids who were in a pre-k class I worked with for a year.

Bianca: Which Trucktown persona do you think you best relate to?

Bianca: I felt so lucky to see a glimpse of your next Trucktown project, will you tell The Children’s Book Review readers about it?

Jon: No, I can’t. Well … maybe. Oh, okay you talked me into it. The third Trucktown picture-book is going to be TRUCKTOWN NURSERY RHYMES. Just as you might imagine, it’s nursery rhymes (and songs) with all Trucktown characters. Like:
Jack be nimble, Jack be quick, Jack smash through the wall of brick.
It turned out to be the perfect way to introduce pre-k readers to my favorite form of writing — parody. And the illustrations are wonderfully hysterical.

Bianca: Did you select your amazing team of illustrators yourself?

Jon: I worked with my editor and my art director at S&S (Simon & Schuster) to pick illustrators who could work together and collaborate with everyone else in the production. I had never worked with Loren Long or Dave Shannon or Dave Gordon before. But we saw something in each one’s art that could bring trucks alive. And boy did they ever. I am thrilled with what they did.

Bianca: Out of all of your books, which has been your most favorite to create?

Jon: Hard to say. They’ve each been interesting in their own way. STINKY CHEESE MAN is great because it could not have been done without me and Lane and Molly (Lane’s wife, our designer) working together. And then the entire Trucktown project — books, website, future TV/toys/merchandise has been an amazing and ever-expanding collaboration.

Bianca: Which is your family’s favorite? And what do your children think about your books?

Jon: My kids grew up with 3 pigs and Stinky. And I told them the stories that became the first Time Warp Trio books as rainy day time killers. But I don’t really know what they think of my books. My daughter Casey is out of college and is working on her own book right now — a graphic novel of her experiences with her boyfriend (and now illustrator) about their adventures from teaching in Beijing to working in Timbuktu. To be published by Roaring Book Press. Out in 2010 I think. And she is a great writer. 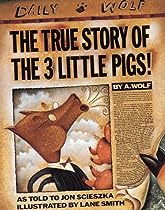 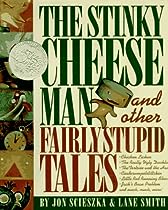 Bianca: Which books from your childhood left the biggest impact on you? Did they inspire any of your own work?

Jon: Go, Dog. Go! shaped my life. It gave me a reason to be a reader. It challenged me to be a writer. And it showed me the enduring value of funny.

Bianca: I imagine that someone as ‘charismatic’ as you has some pretty interesting writing quirks, do you?

Jon: Are you talking about my habit of writing in a full tuxedo while being fanned by trained monkeys and guarded by twin black panthers? I thought everyone did that.

Bianca: David Shannon – in a recent interview – spilled the beans about an upcoming project you are both working on, a book about a robot. Are you able to share any information on it, or is it too soon?

Jon: Darn. Now I’m going to have to take care of this “incident” too. Release the panthers! Though I guess I can tell you that Mr. Shannon (also my Vice Ambassador) and I are working on a picture-book called Robot Zot. It’s a story of a very warlike robot who crashes into earth to take over all civilization. He bursts into the first Earth Fortress he sees, doesn’t notice that he is only 3 inches tall, and proceeds to mistake all of the kitchen and household appliances for earthlings, and beat them to a pulp. Vice Ambassador Shannon is painting the book right now, and what he has produced so far is criminally funny. The guy is a genius. (But don’t tell him yet. He has a lot of paintings to finish.)

Bianca: If there was one question you wish people would ask you, what would it be and how would you answer it?

Jon: “Where should I put this suitcase full of 100 dollar bills for you, sir … and what is the next of your 28 wishes?” would be a great question.

Bianca: What is the most enjoyable part of being the National Ambassador for Young People’s Literature?

Jon: I get to read all kinds of great kids’ books and brag about them. I just read the National Book Award finalists and loved THE SPECTACULAR NOW by Tim Tharp for older readers. And Dave Barry and Ridley Pearson’s SCIENCE FAIR is the funniest book of the year. I also enjoy meeting up with the other Ambassadors and Laureates and participating in our secret rituals.

Bianca: Any final words of encouragement or inspiration for parents of reluctant readers (Ambassador Scieszka’s specialty)?

Jon: Help your kids find reading that sparks their interest. Help them find the book that will be their GO, DOG. GO! It’s out there. It might be a non-fiction book about prehistoric sharks. It might be a Calvin and Hobbes comic book. It might be an audio recording, song lyrics, movie script, or on-line puzzle.

Don’t worry about the level, or difficulty, or the test score. Help kids find what they will want to read. Then they will become readers for all of the right reasons, not because we told them to.

Bianca: True words of wisdom! Thank you so much for the giggles you provided and, of course, for your time.

How You Support The Children's Book Review
We may receive a small commission from purchases made via the links on this page. If you discover a book or product of interest on this page and use the links provided to make a purchase, you will help support our mission to 'Grow Readers.' Your support means we can keep delivering quality content that's available to all. Thank you!
Bianca Schulze Jon Scieszka
Share. Facebook Twitter Pinterest LinkedIn Tumblr Email
Previous ArticleLink and a Quote: Holiday Picture Books
Next Article The Swamps of Sleethe: Jack Prelutsky