In the Spotlight
HomeBooks by AgeAges 9-12Bran Hambric: The Farfield Curse: Kaleb Nation
by: TCBR Contributor 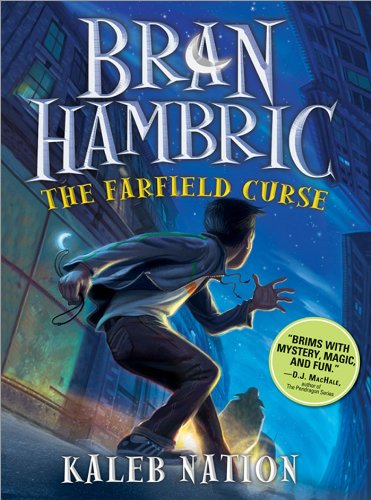 Kaleb Nation, the 20-year-old author of Bran Hambric: Farfield Curse, began writing this book at the age of 14. After spending four years rewriting the book, Kaleb has produced an energetic and exciting first novel. The prologue sets an eerie and suspenseful pace that reads like the scene from a good movie. Bran’s mother dies protecting him from a mage, and manages to transport him safely to a locked vault within a bank and completely clear his memory. Fast forward 8 years and the story takes off.

Bran, who is 14, has been living in the attic of a family home belonging to Sewey and Mabel Wilomas — Sewey is the man who found 6-year-old Bran in the locked vault. Unsure of who he is and where he came from, Bran holds onto the hope of reuniting with his mother. He is also unaware that he is a mage. A mage that happens to be living in a town where it is illegal to be a mage or a
gnome — anyone who is found to be a mage or a gnome is sent to jail. After a burglary which leads to an encounter with a creature that will have your hair raising, Bran begins to learn about his past. Little-by-little, Bran’s tale unravels consistently, like a good mystery should.

Kaleb’s characters are all very unique, but it is certainly the well developed persona’s of the kooky Wilomas family that add flavor to this creative book. His writing also offers up vivid mental imagery and, at times, emotional power.

“With those final words, it was as if a torch dipped in oil had caught flame within his soul, lighting him inside once more.”

Publisher’s synopsis: In a bustling metropolis where magic is outlawed, a six-year-old child is found inside a locked bank vault. A scrap of paper reveals his name: Bran Hambric. The child remembers nothing of his life before the vault. Only magic could have done this. But why would any mage risk breaking the law to place a child in a bank vault?

Eight years later the City of Dunce has forgotten about Bran. Even his foster parents don’t seem to know he exists. But there are those who have been watching, biding their time, waiting to strike, people who know where Bran came from and why he was sent away. And they will do anything to get Bran back, dead or alive…

About the Author: On the third night of the third month in 2003, 14-year-old Kaleb Nation had a sudden idea that began the story of Bran Hambric, a novel that would take most of his teenage years to write. Kaleb hosted his first radio show in Texas at age thirteen, and has since launched several websites, including kalebnation.com and TwilightGuy.com. Aside from writing, Kaleb enjoys creating music and blogging. A home-school graduate and a former black belt in taekwondo, he currently attends college in Texas and turned 20 in 2008.

Add this book to your collection: Bran Hambric: The Farfield Curse

Any person who posts links to the book’s pages on Amazon.com, the Barnes & Noble website and the Borders website on their social networking accounts (ex: Facebook, Myspace, Twitter, YouTube, blogs, etc), and posts a review of the book on each of the sites, will receive a Bran Hambric Half Moon Necklace and an exclusive invitation to a Blog TV event with Kaleb, where he will reveal secrets from the next book in the series! Links and reviews must be posted and emailed to branhambric@sourcebooks.com September 9 through 30. Please include full name & mailing address in the email.

To read what others are saying, follow the blog tour:

Friday, September 11th
The Inside Scoop With Chandelle
Booking Mama

Tuesday, September 15th
a book in hand
MistiSchindele.com
Not Just for Kids

Please show us some love ...
Share on Facebook Share
Share on TwitterTweet
Share on Pinterest Share
Share on LinkedIn Share
Send email Mail
Print Print
How You Support The Children's Book Review
We may receive a small commission from purchases made via the links on this page. If you discover a book or product of interest on this page and use the links provided to make a purchase, you will help support our mission to 'Grow Readers.' Your support means we can keep delivering quality content that's available to all. Thank you!
Tags
Bran HambricKaleb Nation
Previous Article