In the Spotlight
HomeBooks by AgeAges 9-12Secrets of a Christmas Box: Steven Hornby
by: TCBR Contributor

By Steven Hornby, for The Children’s Book Review
Published: December 1, 2009

The Children’s Book Review presents a guest post by Steven Hornby, author of Secrets of a Christmas Box. Hornby is a multi award winning animator—I’m sure you’ve seen some of his work in ‘The Lord of the Rings’, ‘King Kong’, and ‘Kung Fu Panda’—who has created a truly original Christmas novel that brilliantly showcases his creative mind. This year we selected ‘Secrets of a Christmas Box’ as one of the Best Christmas Kids Books of the year. 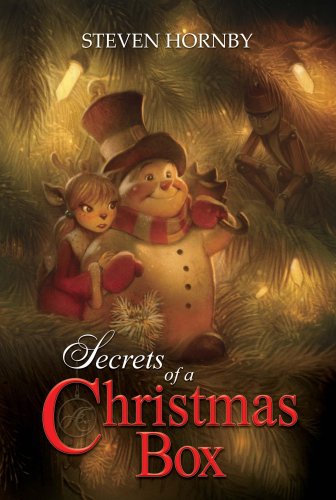 I was sat down outside a cafe, enjoying a warm late-afternoon Cafe Late, looking out over the lake in Queenstown on the South Island of New Zealand. With it being late June, and the middle of winter in New Zealand, I noticed the snow on top of the mountains across the water from me, usually a brilliant white, now glowed with a warm peach color just as the sun settled behind the opposing hillside.

As darkness crept over the lake, several trees alongside the cafe were suddenly illuminated by Christmas fairy lights that littered their trunks and branches. The path of lights had been twisted orderly up and around the trunk of each tree, like candy cane stripes.

I thought, ‘WOW!’, what a beautiful site. Although it was the middle of the year, the early dusk and the chilly calm evening, made it feel almost Christmas-like. As I sat there admiring the lights’ glow, I thought how lucky they were to be out at this time of the year; that they had escaped from being packed away into a box in an attic or garage somewhere, until the following Christmas. It was then I thought how wonderful it would be, if unknown to us, they could be somehow alive.  What if they could see everything going on around them? When they were switched off at night, they could hold onto some of their electric charge and jump out from their sockets and have adventures on the streets of Queenstown, while the town slept. But then I thought, who would they share their stories with? I thought back to the Christmas tree, a tree FULL of ornaments, each with unique characterful personalities. The world of the Christmas ‘Tree-Dwellers’ had begun to evolve in my head.

Although ‘Secrets of a Christmas Box’ is my first novel, I was fortunate enough to apply elements from my experience in the film industry to the story and characters. To animate a character well in a shot for a movie, I need to have the complete back story to that character, which includes his personality, and a map of his character arc throughout the story. This allows me to put myself in the character’s shoes before animating, much the same as a writer does when writing about a character.

I wanted to create a Christmas fantasy adventure, that grabs the reader’s imagination. A story that takes them on a roller coaster ride and mixes in the important values of family and friends at Christmas time. I also wanted to try to answer some questions I had as a child. For example, I had always wondered why pine needles appear in rooms no one has been in during Christmas time? And, reveal who really rips the small holes in the Christmas presents under the tree?

In ‘Secrets of a Christmas Box’, I explore a fantasy world where the Christmas Tree ornaments, the ‘Tree-Dwellers’, come to life, once the family go to bed. The tree lights are there to protect them all from the unknown dangers outside their world, as they live by the laws of the ‘Tree-Elders’, to keep their world safely away from ours. But as Larry, a Christmas Snowman wakes to find his brother missing from the tree this year, he decides to break the ultimate rule of their society, and escape with friends down the tree and away into the house, to look for his brother. On their dangerous travels, they stumble upon a dark secret, that suggests all is not as well as it seems in their own world. They desperately attempt to make it back to the tree to warn the others, and finally uncover the truth behind the ‘Secrets of a Christmas Box’.

Add this book to your collection: Secrets of a Christmas Box

Steven Hornby is a multi award winning animator, bringing stories to life for over 15 years in visual effects and animated movies. Born in Preston, England, he attended Lancaster University for Design Communication for 3 years, which although had nothing to do with animation or telling wonderful stories, introduced him to the world of computer graphics. In 2000, after working on a set of commercials in Europe and Australasia, and his own short film, ‘Zzz Night’, he joined the animation crew on the Academy Award winning ‘The Lord of the Rings’ films in New Zealand, which is where he received a VES Award for his animation on J.R.R. Tolkien’s fictional character, Gollum.

This brings us nicely to the present, where after 3 years of writing, he has just completed the children’s fantasy novel, ‘Secrets of a Christmas Box’ to be released in September 2009. He initially planned the book as a screenplay, after spending several years having the story running around in his head, but instead turned it into his first children’s novel.

Aside from the busy hours at Dreamworks Animation, he has already begun work on the sequel to the Christmas novel, and also a new fantasy adventure, “The Mist Catchers”.

Please show us some love ...
Share on Facebook Share
Share on TwitterTweet
Share on Pinterest Share
Share on LinkedIn Share
Send email Mail
Print Print
How You Support The Children's Book Review
We may receive a small commission from purchases made via the links on this page. If you discover a book or product of interest on this page and use the links provided to make a purchase, you will help support our mission to 'Grow Readers.' Your support means we can keep delivering quality content that's available to all. Thank you!
Tags
ChristmasSteven Hornby
Previous Article