Interview with Lian Tanner, Author of The Keepers Trilogy

As the countdown begins for debut children’s novelist Lian Tanner’s Museum of Thieves, you must read this interview so that you can be in the know about the fantastical journey that awaits readers of The Keepers trilogy!

Q: Museum of Thieves is your debut novel in the thrilling trilogy The Keepers (release date: September 28, 2010).  Can you tell us what we should expect?

A: It’s a fantasy adventure set in the city of Jewel, where impatience is a sin and boldness is a crime. It’s the story of a bold girl, a mysterious boy and a living museum, whose rooms shift and change places, so that only a thief can find a way through them. It’s a story about wildness and risk, freedom and safety, secrets, treachery and magical creatures.

Q: The genre of ‘fantasy’ books is one of your favorites—this shows in your work. Which type of reader or personality type do you think your books will most appeal to?

A: I think it’ll appeal to middle-grade readers who like high-stake adventures, interesting characters, cliff-hangers, and worlds that veer off from ours in unexpected directions. In my experience so far, the book also seems to work for older kids, who read it at a deeper level for the things it says about our own society and the way we treat risk. 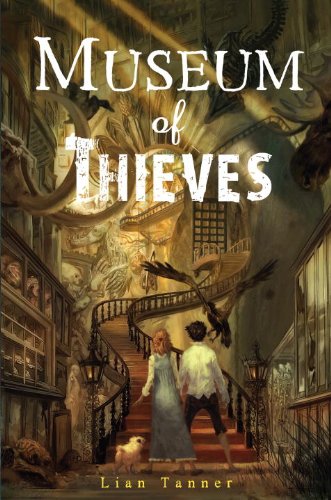 Q: ‘An old rubbish dump, so big that it’s a city. And everything that has been thrown away is there—memories, forgotten people, extinct animals.’ These are the words that you scribbled in your ideas book—they are the seed from which your series bloomed. What were the next steps that followed this initial idea?

A: Probably one of the most important steps was realising that the setting of the book was not going to be a rubbish dump, but a museum. I was reading a newspaper article about the Hermitage Museum in Russia, and a line jumped out at me, something about how, in all the great old museums, time stretches and becomes something more oceanic. That was a real ‘aha’ moment for me.

At the same time I was following a discussion in the Australian media about ‘bubble-wrap children’—children who are so over-protected by their parents that they miss out on a lot of essential skills. As soon as I realised that these two ideas—the museum and the over-protected children—went together, other things started to fall into place fairly quickly. Not just an ordinary museum, but a living museum. That was such an exciting thought! It was then that I started a scrapbook, pasting in pictures of faces that interested me, and names, and anything else that set off that inner spark. For me, this is one of the most interesting parts of writing, picking things out intuitively, then sorting through them until you find the ones that resonate most strongly with each other.

Q: Are you still working on Book 2: City of Lies and Book 3: Path of Beasts?

A: I’ve just finished City of Lies (except for the copy-edit and all the other stuff that goes along with publishing) and am about halfway through the first draft of Path of Beasts.

Q: The characters that you have created are all exceptionally unique. Do you have a favorite?

A: I’m very fond of all the characters and have a number of favourites. But if I had to pin it down, I’d probably say Broo. He’s a feisty little white dog with a curly tail and one black ear. (He also has some hidden talents that I won’t go into detail about because it would be too much of a spoiler.) There’s something very appealing about him, and I noticed when I was visiting the USA on the pre-publication tour that the kids I talked to agreed. Broo was high on their list of favourites.

Q: If you had to choose one of them to live with you, which one do you think would enjoy living at the beach in Tasmania, Australia, where you reside? Why?

A: Again, I think it would have to be Broo. The beach where I live is long and uncrowded, and a great place for dogs. They get to chase seagulls and play with other dogs, and every now and again they find the stinking carcass of a dead fish to roll on. That’s pretty close to dog heaven.

Q: Before adding author to your resume, you worked as a teacher in Australia and Papua New Guinea, as well as a tourist bus driver, a freelance journalist, a juggler, a community arts worker, an editor, and a professional actor. Which of these work experiences, if any, would you say had the most influence on the creation of The Keepers Trilogy?

A: Pretty much everything I’ve done has fed into my work in one way or another. But the two biggest influences were probably teaching in Papua New Guinea and working as an actor.

I taught in PNG for three years when I was in my early twenties. Two of those years were in a bush school on the Gazelle Peninsula, near Rabaul. The school had roughly five hundred children (all of them boarders), and a staff that consisted (for the first year I was there) of three teachers and two elderly Tolai nuns. It was surrounded by villages, copra plantations and lush jungle, with volcanoes circling the harbour. Part of the school grounds included an overgrown valley which contained level below level of underground tunnels, dug out by the Japanese army during the Second World War for use as Imperial Headquarters. The whole place was extraordinary and so were the people, totally different from anything I had experienced before. Looking back, I think they cracked open my imagination, though I didn’t realise it at the time.

Then, when I was in my late 30s, I worked as a professional actor for a small theatre company that toured plays around Tasmanian schools. Some of the plays were wonderful, some weren’t so hot. But, good or bad, a play teaches you about dialogue. When you’re saying the same lines every day for weeks on end, you learn what works and what doesn’t. You learn, too, about structure and action, and how to delve into a character and find out what motivates them. Working in theatre is a good background for a writer—it jump-starts a lot of necessary skills.

Q: On your journey from writer to published author, which one experience stands out to you as the most memorable?

A: Before I started writing children’s novels, I was writing for theatre, particularly puppetry. The first play of mine that was staged was called Heroes. It was a non-speaking piece about a severely disabled boy who had to face both his own fears and the patronising and often cruel attitudes of the people around him, which manifested as crows. The theatre company that commissioned the play created the most beautiful puppets, and the whole production was immensely moving. I sat in the audience and listened to the comments of the children around me as they watched this small boy fighting to make his way in the world, and felt very privileged to be a storyteller.

Q: While you were visiting the USA on your pre-publication tour, you were collecting a list of must-read “American” titles from the people that you met. Were there any titles that appeared multiple times on your list?

A: This was a really interesting part of my trip, talking to people who were passionate about children’s books, and getting their recommendations. I’m currently working my way through them and finding some wonderful books. A number of titles crop up again and again. The most-recommended ones are Suzanne Collins’ The Hunger Games, The Astonishing Life of Octavian Nothing by M T Anderson, and The Maze Runner by James Dashner.

Q: On the reciprocating end, which “Australian” titles would you suggest as must-reads?

A: The Book Thief by Marcus Zusak, Dragonkeeper by Carole Wilkinson, Tomorrow When the War Began by John Marsden, and anything at all by Margo Lanagan.

A: I had a lot of fun writing this book, and I hope that kids will have just as much fun reading it. Oh, and I hope they like Broo as much as I do!

Pre-order this book: Museum of Thieves (The Keepers) by Lian Tanner

How You Support The Children's Book Review
We may receive a small commission from purchases made via the links on this page. If you discover a book or product of interest on this page and use the links provided to make a purchase, you will help support our mission to 'Grow Readers.' Your support means we can keep delivering quality content that's available to all. Thank you!
Lian Tanner The Keepers
Share. Facebook Twitter Pinterest LinkedIn Tumblr Email
Previous ArticleReview: Man Gave Names to All the Animals by Bob Dylan and Jim Arnosky
Next Article Giveaway: The Basking Shark Rescue Team by W.J. Brutocao