In the Spotlight
HomeBooks by SubjectBooks with Girl CharactersShadow Scale, by Rachel Hartman | Book Review What if you’ve spent your childhood living in the shadows, painfully aware that you are taboo—forbidden, in fact, in society—only to find yourself accepted by those within the royal court, needed by the kingdom to save the land from war? When you’ve looked for acceptance all of your life, can you finally learn to accept yourself in order to help others?

In the kingdom of Gorredd, Seraphina has finally stepped out from the shadows and revealed herself, scales and all: a half-breed, born of dragon mother and human father. With the long-suffering, fragile peace between dragons and humans close to breaking, the royal court has turned to Seraphina, for Seraphina is not the only one of her kind, and now she must seek the others–Ityasaari–and bring them together to use their unique abilities for good.

Seraphina has long known that she is not the only Ityasaari, having discovered and made friends with a few, but there are others–strange grotesques such as Pelican Man and Master Smasher, that Seraphina has only met within the safe confines of her mind, in a garden she tends. Stepping beyond the boundaries of her garden will not be easy, especially when Seraphina has carefully locked so much away. There are those Seraphina is scared to reach for fear of rejection, frightened that they won’t believe in friendship and acceptance, even if she can find them, and then there is Jannoula, whose friendship Seraphina herself once rejected, afraid for her own mind. But Jannoula is determined to make friends, and with her influence, she could undo the peace of dragon and humankind for good.

It was with some trepidation that I opened the cover of Shadow Scale. I fell in love with the world Rachel Hartman so deftly created within the pages of her debut novel, Seraphina. It’s hard work, indeed, to live up to expectations, difficult to lead on from a story so beautifully told the first time round. There was a brief moment, during the first two or three chapters of Shadow Scale where I felt that Hartman struggled with such pressure, like a hatchling, to let her wings spread and fly, and I was frustrated by the obvious recapping of past events that lead us to the first real page of this story. For me, the history of Seraphina and her world comes to light on its own in this sequel, even to those who may not have read the first book. This summarised retelling and non-too subtle prodding reminders felt like an editor’s choice. Thankfully Hartman takes the reins back and gets back in her stride–and then she soars.

While Seraphina looked outside–at the world, the politics, the people–the skin and scales of each, Shadow Scale ultimately looks inward. While we travel to new nations with Seraphina, watching the world Hartman so wonderfully created broaden with the same grace, we grow closer and closer to Seraphina, accessing her interiority. Shadow Scale is about shedding skin (or scales) and revealing your true self–which often means confronting dark fears and desires that you’ve long hidden.

Seraphina’s mission across nations far and near is fuelled with internal urgency: there’s the friendships of young Queen Glisselda and Prince Lucian weighing on her, the idea of belonging, losing the loneliness that’s followed her since childhood, of gaining and keeping true friendships: the grotesques in her mind have long been her only friends: what if they rebuke her in the real world? And then there’s her beloved uncle Orma, a dragon, who Seraphina fears will be caught by authorities in order to have his memories erased–losing the intimacy and emotional connection that dragons are not supposed to possess. Seraphina learns to expose herself and explore who she is and her history, in order to find herself. Seraphina has felt she has belonged to neither world: here, Seraphina finally learns that she belongs to herself, and that is enough.

There’s so much at work within this tome: a refreshing diversity of characters, whether by ethnicity or gender or sexual orientation, making for a honest portrayal of real people. Travel provides the metaphor for exploring your self and looking beyond your own viewpoint, while politics weave into romance, nodding toward need before want, which provides a modern, and unexpected twist to the story of Seraphina and Kiggs.

Hartman’s real success in Shadow Scale, in my mind, is in the juxtaposition between hero and villain, doing a remarkable job in showing both sides, and the closeness in each—balancing kindness with malice, fear, trust and friendship, needs and desires, and showing the reader the thread that connects them all. Many readers will relate to the villain, witnessing the vulnerability and heartache that led to her undoing, blurring the distinction between innocent and guilty. There’s soul-searching, loss, bravery and adventure at hand here, shaping a genuinely delightful—and remarkably hard to pull off—sequel that strips the scales off us all, causing readers to look around them, and into themselves. And perhaps best of all, there’s the sense of catharsis—life continues, blooms, dies, and is reborn again, for Seraphina and her people, and the humans and dragons she lives among.

Yes, ultimately, this book didn’t excel beyond the pedestal I placed Seraphina upon, but Shadow Scale sits nicely alongside it with magical, modern, complex and absorbing qualities that propel the story onward naturally, and for the most-part, elegantly. Fans of Rachel Hartman’s breath-taking imagination and startling humane characters, dragons or otherwise, will marvel and mourn as Seraphina’s journey—at least on the page—comes to an end.

Add this book to your collection: Shadow Scale, by Rachel Hartman

Read our review of Shadow Scale, by Rachel Hartman

As a child, RACHEL HARTMAN played cello, lip-synched Mozart operas with her sisters, and fostered the deep love of music that inspired much of Seraphina. Rachel earned a degree in comparative literature but eschewed graduate school in favor of bookselling and drawing comics. Born in Kentucky, she has lived in Philadelphia, Chicago, St. Louis, England, and Japan. She now lives with her family in Vancouver, Canada. To learn more, please visit SeraphinaBooks.com or RachelHartmanBooks.com and follow her on Twitter @_rachelhartman.

This review of Shadow Scale, by Rachel Hartman, was written by Charlie Kennedy. Follow along with our book reviews and articles tagged with Action, Dragons, Fantasy, Rachel Hartman, Romance, Royalty, and Seraphina Series, and our Young Adult Books category to discover more great novels.

Please show us some love ...
Share on Facebook Share
Share on TwitterTweet
Share on Pinterest Share
Share on LinkedIn Share
Send email Mail
Print Print
How You Support The Children's Book Review
We may receive a small commission from purchases made via the links on this page. If you discover a book or product of interest on this page and use the links provided to make a purchase, you will help support our mission to 'Grow Readers.' Your support means we can keep delivering quality content that's available to all. Thank you!
Tags
ActionDragonsFantasyRachel HartmanRomanceRoyaltySeraphina Series
Previous Article 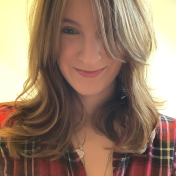 A recent graduate from the MFA in Creative Writing program at the University of San Francisco, Charlie is working on her own first children's fantasy novel. Originally from England, Charlie grew up fascinated by the works of Enid Blyton, Roald Dahl, and other European children's authors. Charlie pursued a career in journalism in both England and the UAE before returning to her true love of creative writing. When she's not writing or reading, Charlie can be found with her camera in tow, capturing the sights within her neighborhood and others, in her fair city of San Francisco.