By Boissevain Books, for The Children’s Book Review
Published: May 5, 2010

Hilda van Stockum (1908 – 2006) was an internationally noted author and illustrator of books for children and young adults. Her first books were published during the the 1930s, a period sometimes referred to as a “golden age” of children’s literature. Published by The Viking Press, these included A Day on Skates (1934) for which she took Newbery Honors, and The Cottage at Bantry Bay (1938), the first in a trilogy of books featuring the O’Sullivan family of Bantry Bay Ireland.

From the 1930s through the 1970s, Ms. van Stockum published more than twenty books. They were widely read and favorably reviewed and were particular favorites among librarians who appreciated their celebration of family life and timeless themes of good and evil.

Ms. van Stockum often used her family as models for the written and illustrated characters in her books, which were known not only for their warm and vivid depictions of family life but also their realistic depictions of life in the face of difficulty or danger. The Mitchells (1945) was a semi-autobiographical account of how the author’s family coped in Washington, D.C. during World War II. Someone asked van Stockum who the protagonist of the book was, and she immediately answered: “The family is the protagonist. The family weathers the storms.” The Mitchells includes a description of her brother Willem van Stockum, who was killed in 1944 on an RAF mission. 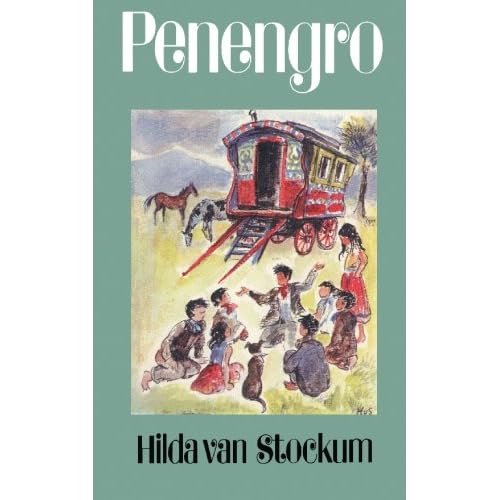 Her most famous book, The Winged Watchman (1962), a recipient of the Brotherhood Award of The National Conference of Christians and Jews, tells the story of two young boys living in a windmill who helped the Dutch resistance during the German occupation of the Netherlands in World War II.  Penengro, initially published in 1972 by Farrar Straus & Giroux and rereleased in 2010 by Boissevain Books, tells the story of a young orphan in Ireland who, after being adopted by a couple because of his resemblance to the couple’s deceased son, runs away and is embraced by a group of gypsies.  Ms. van Stockum had a great affinity for the Romany people and in Penengro depicts the challenges they faced.

In addition to writing and illustrating her own books, Ms. van Stockum translated and illustrated editions of many other authors, including editions of Afke’s Ten, Hans Brinker, Little WomenLittle Men and , and Willow Brook Farm. She was a charter member of the Children’s Book Guild and was the only person to have served as its president for two consecutive terms. Ms. van Stockum was also a painter of some note, showing frequently in galleries in Dublin, Geneva, Ottawa, and Washington, D.C. She was elected an Honorary Fellow of the Royal Hibernian Academy and her paintings are in the National Gallery of Art and other major collections of 20th century Irish artists. In 1993 her still life, “Pears in a Copper Pot,” was chosen to appear on an Irish postage stamp as part of Ireland’s Europa series honoring contemporary art.

Hilda Gerarda van Stockum was born in Rotterdam in 1908 and grew up in Ireland and the Netherlands. As a child, she traveled with her family to France, Switzerland, and the East Indies, constantly filling notebooks with stories and pictures. In 1932, in Dublin, van Stockum married Ervin Ross (Spike) Marlin, the roommate at Trinity College of Ms. van Stockum’s brother Willem (a mathematician famed among time-travel aficionados). Two years later, the Marlins moved to New York and in 1935 to Washington when Spike Marlin won by exam a U.S. civil service position in the Administration of Franklin Delano Roosevelt. The family, which grew to include six children, moved frequently following Spike Marlin to his various government posts which included assignments in Montreal, Dublin, London and Geneva. Hilda and Spike eventually retired to Berkhamsted, England.

Boissevain Books hopes to introduce today’s generation of children and adults to the work of Hilda van Stockum.

Please show us some love ...
Share on Facebook Share
Share on TwitterTweet
Share on Pinterest Share
Share on LinkedIn Share
Send email Mail
Print Print
How You Support The Children's Book Review
We may receive a small commission from purchases made via the links on this page. If you discover a book or product of interest on this page and use the links provided to make a purchase, you will help support our mission to 'Grow Readers.' Your support means we can keep delivering quality content that's available to all. Thank you!
Tags
Hilda van Stockum
Previous Article

Author Showcase: Patsy and the Pup

Author Showcase: Patsy and the...