In the Spotlight
HomeBooks by AgeAges 4-8Winnie: The True Story of the Bear Who Inspired Winnie-the-Pooh | Book Review Winnie: The True Story of the Bear Who Inspired Winnie-the-Pooh | Book Review Winnie: The True Story of the Bear Who Inspired Winnie-the-Pooh

The real-life inspiration behind a beloved literary character gets a touching tribute in Winnie: The True Story of the Bear Who Inspired Winnie-the-Pooh.

Harry Colebourn was about to leave for a military training camp with his fellow World War I soldiers when he happened to look out his train window. Harry saw a bear on a leash! At the other end of the leash was an elderly man who explained to Harry that he had shot the bear’s mother and wanted to sell the cub. Because Harry was a veterinarian, he decided he would be the perfect person to buy the bear and care for her. So began the unique and heartwarming friendship between Harry and Winnie (named after Harry’s military company’s hometown of Winnipeg, Canada). Winnie quickly became a valuable member of the company, acting as a comforting presence for the military horses and soldiers alike. She even traveled overseas to England when the war escalated. However, once the soldiers deployed to France, Harry decided the danger of the battlefield was too great for Winnie. With a heavy heart, Harry took his dear friend to the London Zoo, where a new bear enclosure had just been built. Winnie was a welcome addition to the zoo; she was so gentle that children were even allowed to ride on her back (clearly, zoos operated differently in the early 20th century)! One particular visitor to the zoo, a boy named Christopher Robin, became particularly smitten with Winnie. Christopher asked his father, A.A. Milne, to tell him bedtime stories with Winnie as the lead character. And the rest, as they say, is history. Winnie holds its readers’ attention from start to finish. A fantastic introduction to nonfiction, Winnie includes just enough detail to provide a clear timeline of the bear’s fascinating life. A child can easily retell Winnie’s story to any willing listener (and my two children did just that to their father after I read Winnie to them!). The book ends with a very helpful author’s note, which provides details on bear biology, Winnie’s life, and how the famous suffix, “the Pooh”, came into being. Photographs with captions cover the inside front and back covers and they truly bring this story to life. The pen and watercolor illustrations evoke warmth and tenderness on every page.

Winnie: The True Story of the Bear Who Inspired Winnie-the-Pooh, with its engaging plot and appealing illustrations, should be every parent’s go-to choice when introducing nonfiction to children. Highly recommended.

Sally M. Walker is the author of the ALA Notable Blizzard of Glass: The Halifax Explosion of 1917. She is also the author of Written in Bone, Fossil Fish Found Alive, and Secrets of a Civil War Submarine, which was awarded a Sibert Medal. She lives in Illinois.

Jonathan D. Voss was a portrait artist and graphic designer before becoming a children’s book illustrator. He lives in North Carolina with his family. Winnie is his first book. 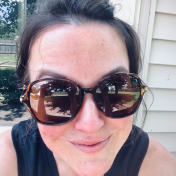